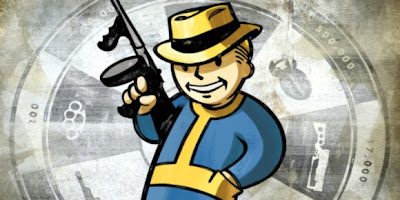 Following the original DLC pack 'Dead Money' will be three more entries each entitled: 'Honest Hearts', 'Old World Blues' and 'Lonesome Road'. These expansions will be launching simultaneously across all three platforms Bethesda has revealed.
The first package, Honest Hearts, sees the courier travel to the unspoiled wilderness of Utah's Zion National Park. However as things go inevitably wrong, the player is caught in a standoff between two tribes as well as two figureheads; these being a New Canaanite Missionary and the mysterious Burning Man. Decisions you make here will determine the fate of Zion. Honest Hearts will launch on May 17th for Xbox 360 and PC and May 18th for PS3.
Old World Blues will see the courier unwittingly become a lab rat in an experiment gone haywire, through this experience you will learn how some of the mutated creatures of the Mojave came to be. In addition to this there is an even greater threat described as you can turn on your kidnappers or help them defeat this unknown threat. Old World Blues is set for a June release.
Finally, in Lonesome Road, it all comes back to the beginning of New Vegas and the platinum chip the courier was tasked with delivering. The player is contacted by the original 'Courier Six' who is in fact a man named Ulysses; he promises to tell you the reason why he refused to take the chip in the first place provided you take on one last job. He wants you to go to the Divide, a place ravaged by hurricanes, severe storms and earthquakes. This DLC will be available in July.
All of these packages are priced at 800 Microsoft Points or £7.49 on the PSN or Steam/Direct2Drive. After Dead Money, I think Obsidian need to prove something with these next additions and they certainly sound promising enough. Once any other information/media comes our way we'll be sure to share it for now though, anyone excited?

Shadows of the Damned Dev Diary - 'Journey Through a Demented Underworld'

Shadows of the Damned, the latest title being developed by Grasshopper Manufacture is shaping up to be an interesting title to say the least. The game follows the story of Garcia Hotspur, a demon hunter who heads off to hell to in order to take on the evils within to save his true love.

A noteworthy point about the title is that it's a collaboration between Resident Evil legend Shinji Mikami and Goichi Suda (Suda51) best known for titles like Killer 7 and No More Heroes.

In this newly released dev diary we see the pair explaining the narrative and key features of the game, albeit with a strange choice of narrator. Aside from the usual game feature descriptions, there's plenty of gameplay to look at too so it's worth a watch if you're interested in the title.