Having only barely played the beginning of the original Deus Ex three or four times, I had little knowledge of what to expect from Deus Ex: Human Revolution. All I did know was that in terms of PC classics, the original is up there with the best of them and being an RPG nut I had high hopes for the rebirth of this franchise. I think most people who have been gaming for a certain length of time have lived to see franchises come back after ‘x’ amount of years only to spurn the hopes and expectations of the fans. It’s great to see then that the folks at Eidos Montreal have managed to create a game that is genuinely a lot of fun based on its own merits.


Deus Ex: Human Revolution tells the tale of Adam Jensen, head of security at Sarif Industries in the year 2027, 25 years prior to the events of the original game, where mega corporate companies are focused on creating and advancing ‘human augmentation’ (think cybernetic limbs etc). The story kicks off with a bang as Sarif Headquarters comes under attack and after a brief tutorial-esque segment of gameplay Jensen is severely injured and must undergo extensive rebuilding that fuses him together with multiple augmentations. It’s here where the game really starts as Jensen is fuelled by the desire to find out the truth behind the attack and who was responsible.

The developers alleged before launch that gameplay and therein gameplay styles would be something that players had a lot of freedom and control over. We were shown that there are around four ‘pillars’ of play style, these being: stealth, hacking, combat and exploration and while you could stick to just being the guns blazing combat guy or the purely sneaky agent; I found when playing that the freedom given to you means that you can mix and match to really suit how you want to approach each situation. To diversify your version of Jensen, players must spend ‘Praxis’ points which can be obtained via experience or in some cases bought at in game stores. The augmentation upgrades range from taking your hacking skills further, to reducing recoil or noise from movement and even to see through walls. The extensive amount of augments lend further to letting players be the badass that they want to be rather than just one exclusive type as said before.


The gameplay of Deus Ex, naturally, doesn’t all rest on the upgrade capabilities and skills, there is also the shooting mechanics and controls to consider. The easiest way to describe how it plays when in combat would be to liken it to Tom Clancey’s Rainbow Six Vegas. If you haven’t played that however then let me explain, you can take cover behind objects by holding down a certain button allowing you to stealth along walls or simply take cover when in a fire fight. You can also aim down the sights of most weapons to make it feel even more like a modern day shooter. Taking all things into consideration it plays solidly most of the time, there are some cover issues here and there like with a lot of titles and it may not necessarily be the smoothest of shooters but is more than good enough to do the job.


Smaller nuances like the inventory are also worth mentioning as it may seem a little ‘old school’ to some, Human Revolution deploys a grid based system although don’t panic if you can’t stand the almost tetris like sorting system as in most cases the game reconfigures the layout to suit what you pick up unless you actually cannot pick up the item. Space is less of an issue later on too if you obtain the inventory upgrade augments. 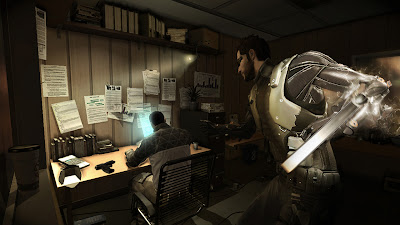 Level design is also well thought out, throughout the game there are 2 major cities that Jensen visits and from here can discover multiple side quests in addition to the main plot objectives. On the whole these side missions were definitely worth doing and didn’t at all feel like ‘just extra content for the sake of it’. With the ease that these additional quests fit in they feel like a natural extension of the plot and when you get rewarded with Praxis points in most cases it seems silly to ignore them. In the case of main missions though, there are often cases where you are taken to an external location such as a company’s headquarters or a docking yard. Most of these were varied enough to hold interest and there is always the choice of taking a different approach than usual to keep things fresh.


It’s not all sugar and rainbows though for the gameplay side of things as the freedom offered when playing and the choices you make can actually cause you some headaches. Headaches in the form of boss fights. Now, I’m not against having these types of encounters in the game but I’m not quite sure as to why the same receptiveness that the levels hold in terms of accommodating any play style isn’t then transferred to these happenstances. These meetings feel incredibly ‘gamey’ and not in the good sense of the term, you generally come to a closed off area where you duke it out with the enemy. While that may sound like what you’d expect, if you’ve been running around with just a stun gun you may find yourself in a pickle. I found this lead to some rather cheap encounters as you have to resort to certain tactics which can leave you feeling unsatisfied upon victory.


Deus Ex: Human Revolution is not a graphical achievement by any stretch of the imagination, but the visual direction does a solid job of portraying the world to the players and you do indeed feel like you’re in an alternate version of the not too distant future. As said previously there are various locations to explore with Detroit and Shanghai being the two major cities to roam around, within these places you’ll uncover nightclubs, police stations, apartments, sewer sections and gang territories as well as some more varied environments later on. One issue though, if you could call it an issue, is that there is never a lack of yellow around. It’s not something that detracts from the experience in any way; just sometimes you can’t help but think a change of colour would be nice. 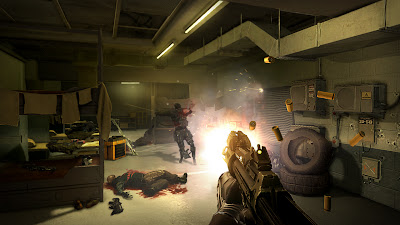 The voice acting on show is generally strong with just a few performances being a little under the bar, Jensen’s performance is a bit of an odd one as at times he seems disinterested and too monotone sounding whereas at other points the acting is ramped up and it’s a believable delivery. All in all though it hits the nail on the head as does the accompanying soundtrack, while there’s nothing memorable from the score you can expect to hear the same sort of sci-fi-esque tunes you’ve heard in titles like Mass Effect.
To wrap up, Deus Ex: Human Revolution is a great title to welcome the masses back to AAA games after the bleak summer period of nothingness. While I can’t comment on how fans of the original game will view it, I can say that to someone fresh coming in there’s a wealth of fun to be had here. With multiple endings and different approaches to tackling the objectives there’s plenty of incentive to run through the game at least once more to get more bang for your buck. With clear inspiration from other classic titles and not just its predecessor I’d be surprised if any RPG or action fan out there didn’t enjoy Jensen’s tale of corporate warfare, evolutionary ambiguity and personal revenge.

What we loved:
Not so much:
Gotten your hands on Deus Ex yet? Let us know what you thought of it in the comments below.
Posted by The_Syndicate at 02:31