Lufia: Curse of the Sinistrals Impressions 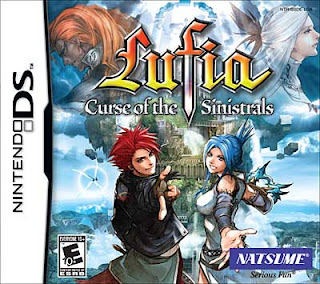 The DS is no stranger when it comes to remakes of older RPG's and the latest one to hit the market is Lufa: Curse of the Sinistrals. This is a remake from the SNES classic Lufia 2: Rise of the Sinistrals, although this is a remake in every sense of the word and not just updated visuals. I haven't played the original so i can't make direct comparisons, i can only detail whats changed and share my time with it so far.
The game kicks off with the declaration that 'Gades' is about to throw the world into chaos and that he is it's new overlord, he also states that those that comply with him will be granted a place in his new vision and if there is anyone foolish enough to attack him then now is the time to do so. After this we see our would be hero 'Maxim' and his professor friend 'Lexis', the two hear this news and rush to the scene to try and stop Gades.
It's here where we see the biggest change from the original version, and thats combat. Gone is the turn based style precedings of old and instead we have a much more action orientated system, you can roll, jump, and hack and slash your way through enemies using typical slashes or more powerful attacks that drain your action bar. This refills overtime though so you need'nt worry about overusing moves, at least not early on.  Managing your equipment and items also seems to be a simple task with basic menus and options you'd expect to see. Travelling is also made rather simple as you just have to select your destination from an overview style menu when moving onto the next plot point/town/city etc.
I'd also like to comment on the music, it has a very 'old school' feel and will be no doubt nostalgic to many, it's easy on the ears and shifts focus when needs be to drive you along. Voice acting is also featured this time around and it's probably what you'd expect of games like this, the acting isn't bad per se but its not great either although if it does annoy you not all lines are acted and its saved usually for more pressing parts of the game.
After some plot procedings the plot delves into typical 'chosen one must save the world' ilk, you learn that Maxim is the one who must stop Gades and the three other Sinistrals (think apocolypse of the four horsemen sorta) however to do so he must go and find 5 other warriors to help him. Don't let a seemingly basic plot sway you though as the characters are all rather charming and the game rubs off on you, and who knows the narrative may pick up later on! There is also a fair share of minigames and side quest elements to the game also however Lufia doesn't fall into the trap of boring you with making them feel like "filler", instead they are generally fun and you won't mind pushing through them in order to advance the plot. 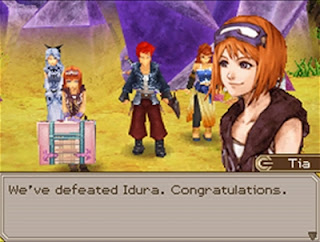 All in all so far it seems like a neat little package and one that should stand out above some of the other mediocre RPG affairs the DS has to offer, so if you need a fix of RPG action in handheld form this fall be sure to give Lufia a look.
Full review to come later possibly.
Posted by The_Syndicate at 08:04